All Collections
Accounting 101
What's the difference between cash and accrual basis accounting?

What's the difference between cash and accrual basis accounting?

An accounting method is a way of determining when income and expenses are reported.

The Cash Basis is when you report income as it is physically received, instead of when you bill for it. You would also record expenses only after you pay for them.

The Accrual Basis is when you count income as it is earned, and expenses as they are incurred, instead of when the money is physically received or paid.

In the case of an expense: You order uniforms from an online company and they send you the uniforms and a bill with an amount that is due within 30 days. When you use the accrual method, you count the billed amount as an expense immediately. If you’re using the cash method, you’ll wait to record the expense until you’ve actually sent payment.

Are there rules about what method should be used when?

For US tax reporting purposes, you’ll choose an accounting method on your schedule C the first time you file your business taxes. After that, if you want to switch to the other method, you’ll generally need to get IRS approval.

Most small businesses use the cash method because it’s easier to keep cash records. But if you’re a store that carries inventory, you’ll probably need to use the accrual method.

How does the accounting method affect my reporting?

As far as producing reports for your own information and management, ZipBooks makes it easy to choose either–or both!–in order to get a full picture of what’s going on in your business. When you’re trying to get loans or investors, you may be asked for reports using both methods. 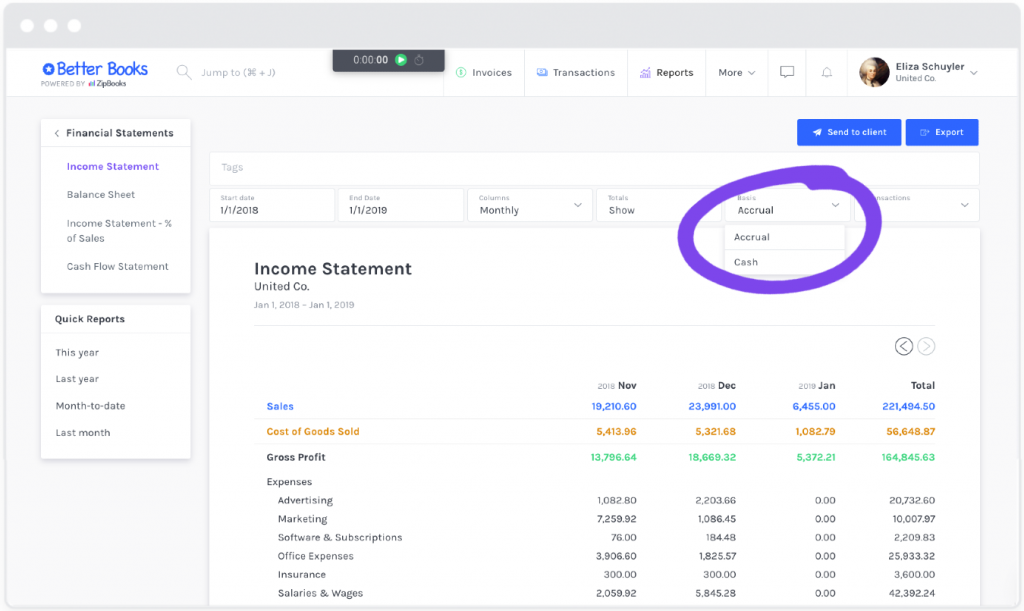 Remember to use the same method for both income and expenses on any given report.

For example, don’t produce a report that shows income based on the accrual method, and expenses based on the cash method. Make sure you’re consistent in the method you choose.