All Collections
Accounting 101
What is straight line depreciation?

What is straight line depreciation?

Straight line depreciation is the simplest way to calculate the depreciation expense line item as shown on the income statement. Without depreciation, the profitability of your business wouldn’t take into account the wear and tear your business has on your company’s assets, like vehicles and equipment.

How do I calculate straight-line depreciation?

We’ve broken down straight line depreciation for you into 4 easy steps.

The reason they call it a straight line depreciation might become more apparent if we graph out the value of an asset in an example. Let’s pretend that you have a business and you just bought a car.

In the graph below, I put the value of the company car on the vertical axis. Time is mapped on the horizontal axis. 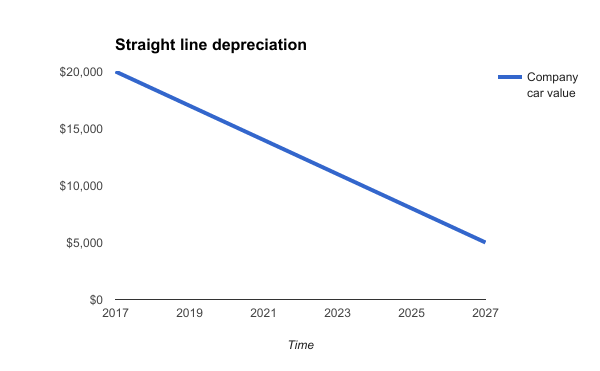 You’re going down $15,000 on the vertical axis over a ten-year period on the horizontal axis. I created the graph by taking the point at year zero of the depreciation schedule (2017) and set it to the book value of the company car at year zero ($20,000). Then at year one (2018) I depreciated the value of the company car by $1,500 to $18,500. After repeating that process for every year for ten years, I end up with the salvage value of $5,000 in 2027. When you connect all those dots in a line, you’re going to get a straight line, so that’s why it’s called straight line depreciation.

Okay so let’s talk about how that actually looks when you’re applying it to your books. If you think about the accounting identity you have assets = liabilities + owner’s equity. If your assets are depreciating that means they are going down in value. Since it’s a debit account decreasing in value, depreciation is a credit. We are going to need an offsetting debit to maintain the accounting identity.

So let’s talk about the same example above and let me walk through how it would work on your income statement, balance sheet, and cash flow statement.

The first step would be you would buy a computer for $20,000. So you would get a $20,000 asset on your property, plant and equipment line of the balance sheet, and depending on how you pay for it. Let’s just assume for this example that you pay for it in cash. You’re going to show an outflow of $20,000 for capital expenditures. So as far as depreciation goes, we’re depreciating $1,500 a year. So that $1,500 would be charged to the income statement for each year for ten years. So that means even though you paid $20,000 in year one and zero dollars in cash after that, you’re going to show profits being reduced by $1,500 in year one, year two all the way to year ten.

For our example, each of these $1,500 charges would be balanced against another account, what we call a contra account under your property, plant and equipment on a balance sheet known as accumulated depreciation. The value of your car is going down and so if you’re moving value one place you have to have it balanced in another place. So the offsetting entry is this line then called accumulate depreciation which effectively reduces the value of the assets that you have. When you add an asset in ZipBooks and mark it as depreciable, ZipBooks automatically creates a contra asset account to track the accumulated depreciation for that asset.

Showing depreciation on the balance sheet

So in year one your balance sheet would show that you have a $20,000 computer, and it would be offset by $1,500 accumulated depreciation contra account. The net value of that asset would be $18,500, and at the end of ten years, the carrying value would be $5,000 and the depreciation expense would basically be done under the straight line depreciation method and you would retire that asset. Retiring an asset means selling it for the $5,000 in cash. If you actually end up selling it for more or less, you would show that as a non-operating revenue gain or expense, respectively.

The truth is that straight line depreciation is useful almost exclusively in teaching the concept of depreciation because it is almost never used in the real world. Congress just can’t stay out of accounting that would make it too easy. In most cases you will accelerate depreciation methods on tax returns, so your tax return has one version and your financial accounting reports based on GAAP standards will be different, so you may have a situation where you’re going to have an increase in your company’s intrinsic value because accelerating the depreciation will mean that you saved more cash this year, and that cash can be worked to create more growth or bigger dividends to the owners.

The tax accounting reports won’t match the financial accounting records, but they will balance out over time and in the meantime you can create a special adjustment as needed. In a publicly traded company this would be reported in financial filings found in the Annual K and 10K filings. The specifics of these adjustments fall outside the scope of this article but just know that they exist and things can get super complicated, but if you’re getting to that point you might want to use ZipBooks to do your bookkeeping.